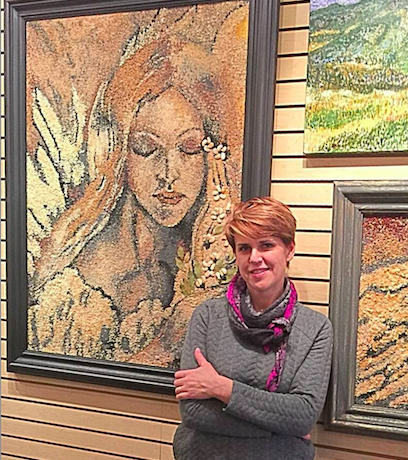 CLIFTON, NJ – The Clifton Association of Artists concluded their Members’ Show “Inspiration” with a celebration of the association’s 50th Anniversary at the Clifton Arts Center on Saturday, April 13th. Prior to the buffet dinner catered by the Royal Manor, Garfield, NJ, Mistress of Ceremonies, Eugenia Gore, reviewed the origin of the Association when twelve friends began painting in a barn and became incorporated in 1963 under the sponsorship of the Clifton Board of Recreation. A first state-wide exhibition was held in School 6 in 1966. Eventually, the group had 90 members. During the many years meetings were held in various locations throughout Clifton until the efforts of former Mayor and Councilwoman Gloria Kolodziej, the converted former quarantine station barn became the Clifton Art Center gallery. As the first group to hold a show in the new gallery in 2000, the Clifton Association of Artists has continued having an annual Members’ Exhibit in the gallery. Outdoor shows, open to all artists, and library shows are also regularly held.